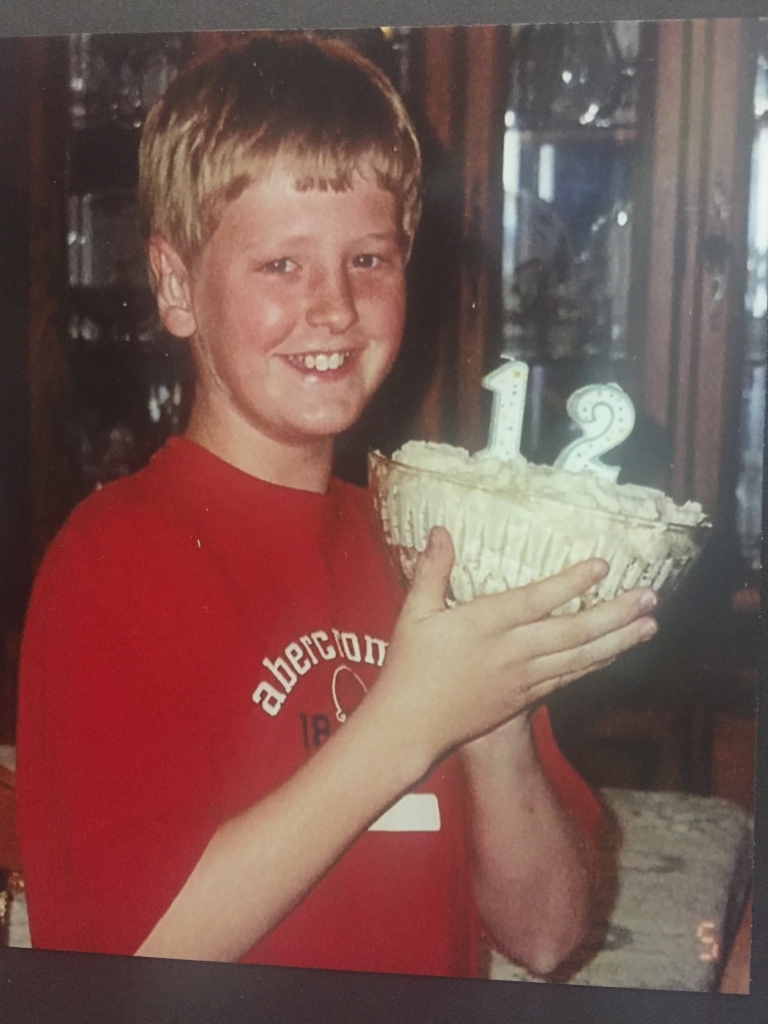 Most 12 year olds want the typical sugary, sweet birthday cake to commemorate their day of birth. Not my son…Aaron never really liked sweets, but the one thing he did love more than anything was mashed potatoes. I can’t remember exactly when his love for mashed potatoes began, but once it developed, it never left him. I remember his 12th birthday in particular, because on that year, my mom made Aaron his own bowl of mashed potatoes with a number 1 and a number 2 candle sitting smack dab in the middle of them. Of course, we had the typical cake….but he loved the bowl of mashed potatoes more than anything else.  Just look at the smile on his face in the photo…you can see the pure joy in his eyes for having his own bowl…that he had to share with NO one. Every time I made mashed potatoes, Aaron would pick out a few potatoes to eat before I had even added butter, salt, and pepper. It got to a point where I almost detested mashed potatoes, because Aaron wanted to eat them almost every single day. And the one thing he loved to drink with his mashed potatoes was milk. Milk and mashed potatoes, were I think were his absolute favorite. When Aaron was a child, we went through a gallon of milk within 2-3 days. He drank it ALL the time as a young boy. Often times late at night when Aaron would wake up, he would heat up any left over mashed potatoes and pour himself a big glass of milk and would annihilate both…until nothing was left.

It’s hard for me to even think about  making mashed potatoes right now, because I know he loved them so much. It’s funny how little things like making a dish can elicit such heartache. It’s the small “stuff” that really seems to awaken the strongest emotions deep within. Not that the big things aren’t painful reminders of our loved one’s absence, but the small reminders strike daily when we least expect it….when all seems to be going well that day…when the world seems to be “good”. It’s the small stuff that hits you square in the face, like a brick wall…leaving you paralyzed in thought, emotion, and in life itself. The small stuff stops you in your tracks almost as if you’re lost in a parallel world. This is a world that doesn’t seem real, but is unfortunately very real.  I am bombarded daily, with small simple reminders of Aaron’s life and his death. I’m working on focusing on the reminders of his life, but some days, the reminders of his death are so overwhelming and so very consuming. And it seems that the harder I try NOT to focus on his death the harder it is do just that.

This grief is a lonely road that has many turnoffs. This road is like a deserted two lane highway with cars passing intermittently….woods on both sides of the road. Traveling down this ghostly road leaves you with an ominous feeling of dread and anxiety. There are others that travel this road with you, but each person is on their own journey, finding their way along their own individual path. Occasionally, you stop to talk to a fellow traveler, and you share some of your journey with them….the similarities in your stories as well as the differences, the feelings you share and the solitude that you feel in the midst of the earth shattering loss you have suffered.  Sometimes, the turnoffs on this road pull us down its path…drawing us deeper down the road, closer to the darkness of the woods…and off the beaten path into a world of spiritual darkness and despair. Sometimes though, we are drawn down paths that are open and brighter. The woods are visible in the distance, but this path meanders away from the woods and the darkness, keeping us in the light.  You just never know which path you will be drawn into at any given moment.

The thing about this journey of grief is that those of us whom have suffered the loss of a child find ourselves drawn together into a unfortunate companionship. While it is an unfortunate companionship, I can say that I have made some friends in this process that have helped me through some of my darkest days and who have encouraged me on those days when it seems that it is impossible to carry on. They’ve been down this road and have such wisdom to share about how to navigate the bends, the turns, and the paths of despair. For those of you, I am eternally grateful. I am also grateful for those of you that have stepped out in your faith and have  reached out to a mother in despair even though you were unsure of what to say or how to approach the situation. That takes courage, and I thank you deeply for it.

So, what does this all have to do with mashed potatoes and milk? Well mashed potatoes and milk were Aaron’s true love when it came to food consumption. It was the one thing that carried over into his adulthood. Aaron wasn’t your typical kid. He didn’t necessarily like what the mainstream kids did….and that made him very unique and very special. So, for his meal to come home to,  he had sent my mom a picture on Facebook  of a mashed potato cornbread cake. Now envision this….the cake is layers of cornbread. The frosting….is of course, mashed potatoes with some gravy drizzled in strategic places. Then as a centerpiece fried chicken is placed in the center of the top layer. Sadly, this  was a meal that was never meant to be. So, I swallow that reality with a lump in my throat and heaviness in my chest.

So, how do I find solace in the memories of his love for mashed potatoes and milk?  What can that memory possibly do for me at this point in my life? It grounds me in who Aaron was as a child and some of who he was as an adult. While he loved to eat, I know that he would help others find something to eat if they were in worse circumstances than himself. My mother saw Aaron give his last few dollars to someone in need. If someone had a need around Aaron, and he was able to help at all, whether it be in the smallest of ways, he was willing. Thank you, Aaron for teaching us that no matter your circumstances, there is always someone in more need than ourselves.

I feel fortunate to have raised such a kind hearted young man, but feel so saddened that he is no longer with us. I am, too, slowly finding comfort in his memories and remembering what a loving, caring, and special person he was.

So, for today, milk and mashed potatoes help me remember a younger Aaron, but also help me recall young man that had learned that life wasn’t all about him….that there were others in this world in dire circumstances….and he often saw and acted up on that need.

Thank you, Aaron for the memory of compassion, mashed potatoes, and milk. But even more, thank you for teaching me also that it’s really the small things in life that matter.

10 thoughts on “Lessons Learned from Mashed Potatoes and Milk”

This is a text widget. The Text Widget allows you to add text or HTML to your sidebar. You can use a text widget to display text, links, images, HTML, or a combination of these. Edit them in the Widget section of the Customizer.
%d bloggers like this: