Cousins and siblings share a unique bond, and when I look back at photos of Aaron’s “growing up” years, I see 4 cousins that were inseparable. They were the four musketeers. They were together almost daily, and they all loved each other…well, maybe at times it was a little of a love/hate kind of relationship. Did they fight?? Of course they did, they were family. Isn’t that what families do? But in the midst of all of those squabbles and disagreements was an alliance that couldn’t be broken. Their alliance was one of unconditional love…no matter how mad they got at one another, they always came back to each other….ready to play, laugh, wrestle…and yes fight.

I have so many memories of sleep overs, Easter egg hunts, swimming pool visits, and beach trips that flood my mind. They are cherished memories that are dear to my heart and I treasure them with everything inside of me. Jeremy was Aaron’s first real “friend” (really his cousin) outside of his immediate family (his father and I).  They were always so much fun together. Aaron was about 5 years younger than Jeremy, but Jeremy took Aaron under his wing…teaching him about Teenage Mutant Ninja turtles and Aaron teaching him about Power Rangers. Occasionally, Jeremy might have to watch Barney…that annoying purple dinosaur…but he was a good sport about it, from what I can remember anyway. Jeremy and Aaron were the beginning of the 4 musketeers. Then came Zachary, Jeremy’s brother…Aaron’s other cousin. 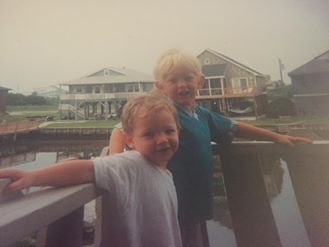 o now, they were the three musketeers…Aaron, Jeremy, and Zachary. The one memory that really stands out in my mind about Aaron and Zach is that when Zach was a baby, Aaron just loved to rub his little bald head. I have so many pictures, where Aaron is rubbing Zach’s head. And as he would rub Zach’s head, he would speak so softly and sweetly to Zach. As they grew, Aaron, Jeremy, and Zach became somewhat obsessed with video games and they would compete on who had the newest and best game. There were more than a few disputes that had to be settled over whose turn it was to play and whose turn it would be in the next round. Now, don’t think that I allowed them to sit for hours playing games…I did make them go outside to play. But, I didn’t really have to make Aaron go outside, because he LOVED to be outside. He would play for hours outside with both of his cousins climbing trees, playing cops and robbers, or acting out Power Rangers. Yes…Aaron still loved that show too! A few years later, the 4th musketeer came along…Aaron’s sister, Taylor.

Aaron and Taylor, brother and sister…Now, this rea 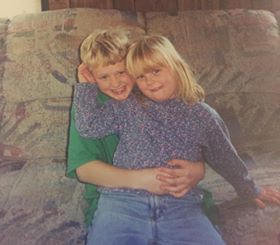 lly is a story of a true love/hate relationship. They truly loved each other, but they also truly hated each other at times. It started at a very young age. I remember one instance in particular that should have warned me of the fighting to come years down the road. On that morning, I was getting ready for church. Aaron and Taylor were sitting on the couch….on opposite ends of the couch mind you…watching some kind of cartoon. All of the sudden I heard Aaron wail. Now, I was just down the hallway and if I stepped out of the bathroom, I could see them both clearly. Well, I did just that, I stepped out to see what was going on…and all I saw was Aaron crying and Taylor sitting on the other side of the couch like nothing had happened. When I asked him what was wrong, he said, “Taylor hit me.” I didn’t see that happen and she looked so innocent. So I thought that I would have to catch her in the act. My next course of action was to go back to the bathroom and go all the way in as if I couldn’t see them. Once I was sure that they knew I was in the bathroom, I slowly poked my head around the bathroom door to take a gander at what might be taking place. I stood there for just a moment before I saw it…Aaron was on his side of the couch, watching TV and minding his own business, when Taylor looked up and whacked him over the head with whatever she had in her hand at the time….for ABSOLUTELY no reason. That was just the beginning. For years, I broke up more fights than I can remember…and I remember sometimes that I wanted to pull my hair out. But….they still loved each other. And they still do. As they grew, Aaron became a little wiser about how to manipulate his sister….which eventually landed him in trouble. As you know, Aaron loved adventure and that adventurous side of him led him to build ramps and attempt to jump them with bikes or sleds when it snowed. However, he always convinced his sister to try it out first…sly, manipulative, cunning? Yes, just a little…but also a little smart. He would test it out on her to see what the ramifications might be for himself. Needless to say, Taylor would get hurt and Aaron would get in trouble. They fought so much that I finally got to where I would make them sit on the bed looking at each other without saying a word. It was torture for them…and sometimes for me too.

I think back on these memories with a grateful but heavy heart. These memories are so vivid and it seems like only yesterday that they were as young as they are in the pictures above. As time passed, they all grew and they all changed. But one thing remained constant…they loved each other. They may have had differences, but regardless, they were family and no one outside of the family could “mess” with any of them. They had each other’s back…and they were serious about that. They were loyal to each other despite their differences.

These memories bring me back to a time when all was right in the world. Real pain and suffering was something I had yet to experience. I was in a different season of my life at that point…I guess you could call it summer. The faces were always smiling and the sun was always out. Little did I know how precious those memories would be years down the road. I now feel like I’m in a never ending season of winter…with gray skies, bare trees, and a chill that goes to the bone. Occasionally, I have days with sunny skies and warm temperatures, but then out of nowhere the winter seeps back into my heart, slowly spreading its icy fingers throughout my chest. One day, I know, that God will bring me out of this winter season, but that will take some time.

As I think about this season of my life, I think about the season Aaron had entered the weeks before his death. He was the happiest I had ever seen him in his adult life. He was the most positive I had ever seen…he had entered his own summer season in those weeks before his death. And then, before I knew it, I received the news that he had passed away. I take some comfort in knowing that Aaron had found his summer, but I also feel just a little cheated that he had just found it. Regardless, I know there was a plan and that God knew what He was doing….even though it’s the most painful thing I have ever experienced.

So, in the midst of this pain, I think back on the bond between those 4 cousins…and I think about the unconditional love they had for each other. That love hasn’t ended…it’s just taken on in a new dimension now. Love doesn’t end just because someone passes away…actually, it grows stronger. And even though our hearts hurt with the knowledge that Aaron isn’t here with us, we still love him with an unconditional love…just as we did before…and he does us….just from afar. That’s a bond that will never be broken…And because of this bond, our season of winter may never fully leave us, but we will always have a season of summer in your memory, your smile, your laughter and your unconditional love

Your family loves and misses you, Aaron and you will forever be in our hearts.

One thought on “A Season of Winter”