After the death of a child, all parents have regrets about what they should have done or said…this is my letter to Aaron, expressing my regrets. It’s better to get it out and deal  with it than to hold those regrets deep within your  being.

Last night, I was sitting on the couch…my heart downcast….still in disbelief at our current state of being. Thoughts of you are always in my mind. Sometimes those thoughts are pleasant and I remember the good and the funny times. At other times, the thoughts that fill my mind are full of sorrow…not only for the physical loss, but for the loss of what would be.

As I thought about you last might, I had such a strong desire to see your smile….to 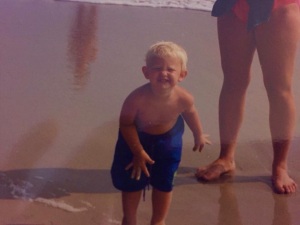 hear your laugh. So I did the only thing I could do. I pulled out some of your pictures. As I looked through those captured memories, I smiled at the joy on your face that was present in almost every single picture, and I could almost hear the laughter behind that smile. Some of those pictures captured your joy as a toddler and some captured your joy as an older child. Despite your age….there was a beautiful smile that I didn’t learn to appreciate until now. That saying, “You don’t know what you’ve got until it’s gone” is so very true.  I looked at your smile for 23 years and never understood the gravity of never seeing it again for the rest of my life. Your smile was so heartwarming  and your laugh was so contagious. I can remember when you were little, your laughter would almost seem endless…and the chuckle  came from deep within. Others would walk by and say, “if you could bottle that and sell it, you would be rich.” What I didn’t realize was how rich I already was. I didn’t have monetary wealth, but I had you, your smile, your laughter and your beautiful spirit. I was wealthy by simply having you in my life. I’m sorry for taking that for granted.

As I reminesce about your younger years, I realize that the things you loved as a child

became the things you were passionate about as an adult. Outside was one of your favorite places to be. I can remember coming home in the afternoons after picking you up from daycare….and the first thing on the agenda after carrying our belongings inside was to go back outside and play. We would stay outside until dusk began to settle in…and I would have to carry you in kicking and screaming, not wanting to go in the house. As an adult, your love for the outdoors became even stronger. You loved to go camping in the mountains…they were your home…a place in which you were most comfortable and could be yourself. If I had to  guess, I would say that the mountains often called your name, sometimes making it unbearable for you to be so far away. One of the hardest things for me to see on your Facebook page after your death was a post you had made just a few weeks earlier….something like…”I’ll be home soon….I’m so excited.” And another one from your visit home in November…a picture of my backyard and the caption reading, “I’d take this anyway over San Diego.”  As I have stood over your grave at times, I think…”You made it home, but not in the way I was hoping.”

One of your other passions as a child was working puzzles and building with blocks. I

remember one day in particular, I walked into your room…you were about 2….and you were sitting in the center of a myriad of puzzles. You were surrounded on all sides by puzzles and puzzle pieces. I will never forget that image…it is a beautiful memory that is forever seared in my mind. As you got older, you continued to enjoy hands on tasks…things that kept your mind physically and mentally busy and challenged. In high school, one of your favorite classes was Carpentry class. You got to build things with your hands..it kept your active side engaged. Skateboarding was one of those hobbies that you embraced as a teen that carried over into adulthood. You were constantly challenged by mastering new tricks and it kept both your mind and your hands industrious. So, it was important for you to be involved in not only hands on, but minds on tasks.

Another love you held both as a child and as an adult was a love for snow. It’s not

uncommon at all for children to love snow, but even as an adult, you would get extremely excited about the prospect of snow. As a child, you loved to sled…and try out jumping ramps in the snow on your sister. As an adult, you developed a true adoration for snowboarding. It became almost like skateboarding. You would push yourself to learn new tricks….and you wouldn’t stop until you acquired the desired skill. This love for snow, was also the beginning of a love for weather. As a toddler, I remember sitting at sonic one day and a very strong wind came rushing by….you were terrified…but almost mesmerized by the event. There would be other times that we would be in the middle of some pretty scary storms and you would react in the same way….you would be terrified, but mesmerized at the same time. I just knew that you would grow up to be a weatherman….or something to do with the study of meteorology. And, as a matter of fact, you were making plans to do just that. A dream that is now lost.

So, I guess what I’m trying to say to you in this letter is that I’m sorry for the words I never said when they were needed the most. The words of encouragement that I didn’t give when you needed it most. I was busy with life and took it for granted that I would always be able to tell you how proud I am of you. I’m sorry for the fascination with my career and losing sight what truly mattered…..you and being there for you when you needed me most. And the one thing that haunts me to this day is not saying ,  “I love you” your last night on this earth. I know you knew that I loved you….but I didn’t say it….so if you can hear me now….know that your mom loves you with all of her heart.

I will forever hold you in my heart and will continue to love you until the end of my days.

To my readers….take it from a mom that has experienced the worst loss one can experience….the loss of a child….say what you feel….tell them you’re proud when they need to hear it….tell them you love them every single day. Don’t be like me and be sorry for the last words you never said. You never know when the opportunity to say these things to your child will be taken away.

One thought on “The Last Words I Never Said”