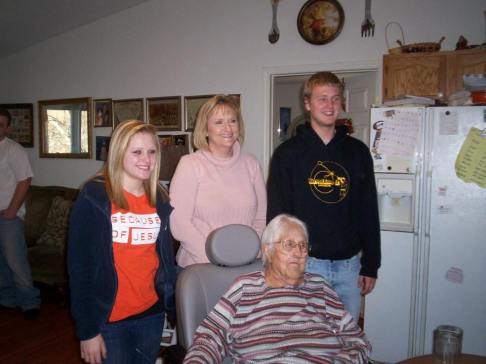 As Fall approaches, I am reminded of so many vivid memories. Fall for, me used to be one of my favorite times of year, and I still do enjoy the colors of the season and the crispness in the air. Its just such a peaceful time of year….the sky is a bluer blue than it is any other time of the year….the air is filled with the smell of campfires and the smell of the leaves as their colors morph into golden yellows, scarlet reds, and fiery oranges that display the brilliance of Fall’s transformation. Most people think of all things pumpkin spice, jack-o-lanterns, cobwebs, and family bonfires. I have some of those memories too…but for the past two years, Fall has been a difficult time for me.

Several years ago, in 2011, my grandmother died in October. At her burial, I remember Pastor Douglas standing on the other side of her coffin, while the family faced him, listening to the beautiful words he spoke of my grandmother. Something that sticks out in my mind from that day…as Pastor Douglas spoke, showers of yellow flowers rained down behind him…permanently etching in my mind that vision which made me feel that not only were we mourning the loss of my grandmother and my mom’s mother, but that the world was mourning her loss as well as the trees almost cried tears of leaves. It was a beautiful moment, but it is what I always think of now when I see yellow leaves fall from trees in large amounts.

Almost two years ago, my memories bring me back to my brother’s fight with cancer. His fight started in late June/early July…and four months later, he was gone. October 1st was his 52nd birthday and on October 31st, he lost his battle with cancer. It was Fall…once again. I remember sitting out on my mom’s porch the day we found out that he had 2 weeks left to live. It was a cool October day….the sky was somewhat cloudy. As we sat on the porch, the phone rang, and it was my brother. I heard him say two weeks….and then I heard the despair in my mother’s voice….and it hit me….he only has two weeks left to live. I remember the shock and the complete sadness and disbelief that encompassed me…and I remember the pain on my mom and dad’s face. It was horrible. The last coherent words my brother and I spoke were, “I”m going to beat you and Mike there.” and “I love you Carmie.” The first set of words took place the day after we found out he had two weeks. The last set of words were spoken only 3 days later when he was put into hospice. He remained with us for 3 more days and then he was gone….we didn’t even get two weeks with him. It was one of the hardest things I had ever dealt with in my life. Steve and I were close…he was always there for me…no matter what…despite our differences. He loved me unconditionally…as I did him. That is my memory of Fall of 2015. Aaron did get to come home for the burial…we were trying to get him here to be able to say goodby to Steve, but Steve just couldn’t hold on until Aaron got here. Little did I know that there was more to come.

Four short months later on February 10, 2016, I received a visit from two uniformed Navy soldiers informing that my son was found unresponsive earlier that morning. He had been taken to the emergency room, but couldn’t be revived. I got that news at about 5:30 that day. My son had died around 6 AM that morning…and I didn’t find out until late that evening. I’ve explained my grief numerous times in my other blogs….but it still seems that the loss of a child just can’t be explained. It’s one of the hardest things I have ever had to live through….and it is life altering. I have learned, as I have said many times, I will never be the same Carmen that I was a year and a half ago. I am learning to cope…some days I do pretty well…other days, not so much. You never know when the grief is going to hit, how intense it will be, or how long it will last. Some days, you feel that you just can’t go on, because the pain is so unbearable…but you do. You pick yourself up each and every day….and you do what you have to do to get through the day. Aaron died in the winter…so why does it make me think of Fall? Well….Aaron’s favorite time of year was fall and winter…fall especially as an adult. He loved the crispness in the air and the beautiful foliage of that time of year. And, he loved winter…snowboarding was one of his absolute favorite things to do in the winter. He would get lost for hours on the ski slope boarding down the hill over and over. It was his skateboard in the winter.

All of those memories make me smile….but they also bring with them an air of sadness for each person that I have lost. When I drive down the road and I see a mountain on fire with crimson red and flaming orange leaves, I automatically think of Aaron. He would have loved to be hiking that mountain in the Fall and snowboarding down it in the winter. When I see those yellow leaves floating through the air…I think of my grandmother and how the world mourned her loss that day. And when I think of October, I think of my brother’s battle with cancer and how he lost that battle so quickly.

While I still love Fall….it does bring with it a certain sadness that my family has experienced a tremendous amount of loss over a very short period of time. Despite the sadness, Fall is still beautiful, relaxing, and peaceful…I’ll just have to work a littler  harder to really see the beauty and to feel the peace.

Missing my Granny Rube, my brother Steve, and my son Aaron this Fall season…

4 thoughts on “A Different Kind of Fall”