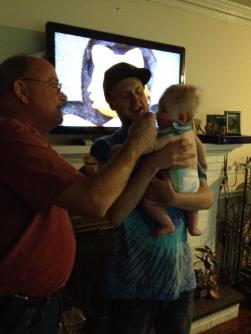 I know I’ve been gone for a while, but for quite some time, I just wasn’t able to write….February and March were extremely difficult for me. Those two months took me to a new low….one that was similar to first few days, but different as well. With this low came the raw and merciless pain, but this time that raw, unforgiving pain was accompanied with the enduring knowledge that Aaron is gone forever. I know that people say that they are never gone….and that they are always with us, but those words seem so empty when they really aren’t here….in the physical form. I want my son here, physically, to experience life with us as we grow older, as we watch Taylor and Jake get married in December of this year, and as we watch Katie and Jordan get married in 2019. I want him here to spend time with Eli, Addi, Hunter, and Lailah. I want him here to celebrate as I earn my Master’s Degree. I want him here to spend family dinners with his granny and papaw, my brother Mike, Susan, Jeremy, and Zachary. You see, it’s not enough to know he’s here in spirit. That brings me no comfort….because he’s not HERE. He’s not here to experience all of those things with us in his physical form….and quite honestly, it sucks. It’s easier for people who have no understanding of this loss to say, “He’s still with you. He’s not gone.” And what I really want to say to that is….NO, he’s NOT HERE! I want to scream that to the top of my lungs, because as time goes on, people…more and more…nonverbally send the message that it’s time to find joy and to remember him with happiness. I do remember him with joy….but with that joy also comes that heart wrenching pain that he’s gone. Taylor and I were just talking the other day about how it still seems unreal at times. The grief we have experienced has fundamentally changed ourselves and our family as well. I long to see him….I long to talk to him….I long to hug him and that longing will be with me the rest of my days.

Time has done nothing to ease my pain….it hasn’t healed my wound…if anything time has hardened me to some degree. Time has isolated me from the world….because as time moves on and as I continue to go through the motions of life….my world to some degree revolves around that day….February 10, 2016. That was the day that my life changed forever….where my world stopped and yours continued to turn. I’ve heard that people who have lost a child have been told that it’s time to move on…I hope that I never hear those words, because I’m not sure if my response would be a kind one. My heart hurts for people have been told that it’s time that their grief comes to an end. I will tell you this…..my grief for Aaron’s loss will never end. I may not show it outwardly, but my heart always aches for his absence…EVERY SINGLE DAY…and that will never change.

My thoughts are different now. That may sound strange, but I find myself thinking more of the here and now instead of the future. Life is more fragile now. I’ve learned that through Aaron’s death. You see, I never ever thought that I would bury a child. That was just something that happened to other families…not mine. So now, I know that the world as you know it can drastically change forever in the blink of an eye. Losing a child is something that I never considered happening to me or to my family. I never even thought about losing a brother either. You see, I lived with the idea that they would both be here forever. I don’t me literally forever, but you just never even, in your wildest dreams, think that a loss of that magnitude will affect your family. I lived in a dream world, but at the time, I didn’t know that it was a dream world. I guess God protects from those things by letting us live in that dream world, because if we actually knew what was going to take place in our lives years down the road, I don’t think that we could survive. I know that you’ve heard me say that my life and my family’s life was changed forever so many times, but I don’t think I can express the depth of the change…of how that change touches every aspect of your not only your physical life, but your spiritual life as well. Even joyous moments that are experienced are touched with sadness, because Aaron isn’t here to experience those moments with us.

Kenny Chesney has a song called “Don’t Blink”, and one of the verses hit me like ton of bricks one day. In that verse, he says, “When your hourglass runs out of sand, you can’t flip it over and start again.” What a way to say….take joy in the moment and in the time you have and to not take life for granted. We all get so wrapped up in the mundane routines of life, that we lose our focus on what’s important. I’m guilty of that, and now I wished that I had cherished those moments more, experienced those moments with unbridled happiness…and that I had laughed and loved more. I guess we all say things like that…after all, hindsight is 20/20.

I don’t want to paint a picture that all of the moments spent with Aaron were good, because as you know, he battled addiction. But, even with that, I still long for him to be here in this world. I heard a friend say one time, “I know that our lives were traumatized with the addiction, but it was MY world and MY life, and as weird as it sounds, I want that back.” I understand that statement to the fullest degree. Despite all of the things we experienced with Aaron’s addiction, I would love to have him back. But at the same time, you think…would I really want him here to suffer with his addiction, like he did for so long? And I think….YES, because maybe he could have overcome it. But then there’s the possibility that he wouldn’t have either. The death of a child, especially to overdose, makes you live through all of the what if’s, should haves, and would haves. I guess anyone who has lost someone experiences those same thoughts, but to some degree you feel a sense of guilt for not having done more…even though there was nothing more we could have done.

So, my point is….don’t blink, because as Kenny Chesney says, “You just might miss your babies growing up like mine did.” It’s gone before you know it, so enjoy the time between the blinks, because one blink can change your life forever.

2 thoughts on “Blink of An Eye”